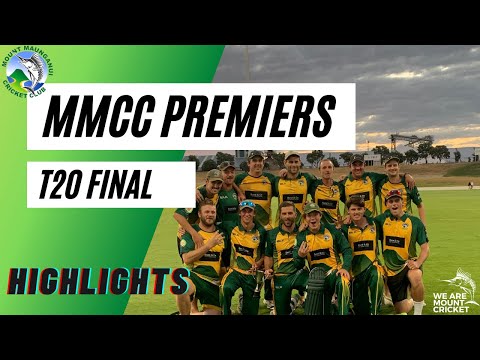 Mount Maunganui T20 Captain Ben Pomare said “To win four T20 titles in a row was very special. We have a good squad and it was good to bounce back from not getting our name on the Bay of Plenty Cup this season”

Greerton, who won the toss and elected to bat, were quickly in trouble losing their first wicket with just two runs on the board. Mount Maunganui Captain Ben Pomare, went to his spin attack early in the Greerton turn at bat, in order to blunt the Greerton big hitters, with immediate success.

Greerton opener Taylor Bettelheim steadied the ship, with Greerton at three down with 42 runs in the book, when Bettelheim (23) was adjudged LBW to the bowling of Craig Baldry in the eleventh over.

The introduction of Mount veteran Dale Swan continued the Greerton misery, with Swan grabbing three wickets, which saw Greerton in desperate trouble at 7/48. The Greerton tail wagged a little, with number nine Mitchell Rush posting his sides second highest total of 11 runs, before they were removed for a paltry 67 runs.

Craig Baldry finished his outstanding spell, with his team’s best bowling figures in taking three wickets for 12 runs, with Peter Drysdale chipping in with two wickets. “Our slow bowlers did the damage bowling dot balls, with testament to our bowlers ability on the night, in not conceding a single boundary in the Greerton innings”, said the Mount skipper.

While Greerton had the 'runs on the board', the Greerton bowlers faced a herculean task to reel in a super confident Mount Maunganui side. Ben Musgrave was the first Mount batsman to fall, with a valuable 17 runs, with his side reaching the 22 run mark. Fellow opener Peter Drysdale played a patient innings, with his side at 54 for the loss of four wickets, when he was removed for 14.

Dominic Crombie and David Hancock took the Mount through to a six wicket win, with identical totals of eight not out. Greerton strike bowler Dan Spencer troubled the Mount Maunganui reply and was rewarded with two wickets at a cost of 9 runs.